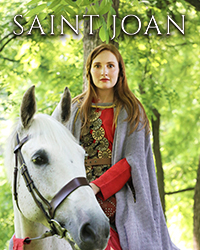 A French country girl finds herself on trial for her life after the nation’s rulers become threatened by her influence and popularity. With mysterious visions of saints inspiring her to help recover France from English domination, she paves the way for victory. Starring Clare O’Malley from "Hetty Feather" and "Something Wicked This Way Comes," this epic, transcendent story brings renewed life to one of history’s greatest heroines as she pushes the boundaries of a society dominated by political and religious forces.