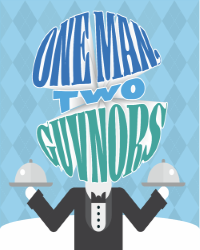 ONE MAN, TWO GUVNORS BY RICHARD BEAN BASED ON SERVANT OF TWO MASTERS BY CARLO GOLDONI WITH SONGS BY GRANT OLDING DIRECTED BY BUD MARTIN FEBRUARY 1-19 One man, two jobs—how hard could it be? Down on his luck and permanently hungry, Francis finds himself employed by two bosses as an engagement party goes horribly awry. As confusion reaches a fever pitch, bumbling Francis takes advantage of the chaos with an ambitious plan to line his pockets. Set in 1963 in Brighton and delightfully underscored by a live skiffle band, this hilarious play transforms Goldoni’s 18th-century classic Servant of Two Masters into a fast-paced, satirical, door-slamming farce.