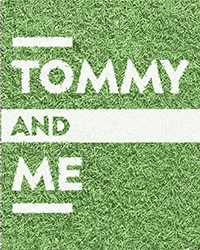 SAFETY UPDATE: DTC will require our audience members to show proof of vaccination before entering the theatre or a negative COVID test within 72 hours before showtime. A matching ID must be shown as well. Also, following CDC guidelines, we’re requiring everyone inside the building to properly wear masks at all times.

Philadelphia Eagles’ Hall of Famer Tommy McDonald was the famously tough wide receiver who helped take the Birds to the 1960 NFL Championship game. Beloved Philly sports commentator Ray Didinger’s autobiographical show, Tommy and Me, recounts a seminal time in Ray’s life when he helped his lifelong hero get into the Pro Football Hall of Fame. Tommy was drafted by the Eagles in 1957 and played on the team until 1964. At Franklin Field, he helped the Eagles win against Vince Lombardi’s Green Bay Packers. There will be talk-backs after most performances that will include the cast, director Joe Canuso and playwright Ray Didinger.